Russell Young was born in 1959 in Yorkshire, where he was immediately put into a foster home, then a nunnery, and was adopted before reaching the age of one. No one knew who exactly his birth parents were, though there were rumors his mother was fourteen, and his father was from Italy. In Northern England, he spent much of his time moving from town to town and living an isolating existence. Here he would take his first photographs of birds on the lawn only for the film to come back developed so dark he could hardly make out the birds. Like these first photographs, Young’s life developed with areas blotted by abandonment. The lack of a personal or even a shared history has left him free to explore dreams and fantasies of sometimes better, sometimes harsher worlds. That yearning has resulted in a body of work that is an uncompromising, intimate love letter addressed to these vast reaches, which, with every passing inscription, are revealed to be rich, wild frontiers.

With few prospects other than working in the factory towns, Young lied about his age to attend art college at the age of fifteen. Had he not done so, he would have most likely moved to the streets of London and died. He moved to the capital five years later and caught the attention of photographer Christos Raftopoulos, whom he assisted for several years. Raftopoulos introduced Young to another side of himself, building him his own darkroom, taking him to the opera, showing him the limits of his life did not need to confine him or his work. It was during this time—still rough in nature and occasionally homeless—he photographed the early gigs of Bauhaus, R.E.M., and The Smiths. His innate eye for movement landed him photoshoots for magazines and eventually his first record sleeve cover for the 1986 album Faith by George Michael.

Young continued to photograph celebrities and direct music videos, eventually leading him to the United States. The rock star aesthetic he had brandished in his photography lent itself to his earliest screen prints that followed in the 2000s. His first series, Pig Portraits, shown in Los Angeles in 2003, collected the infamous mugshots (real and staged) of celebrities awash in fame and monochrome but also restrained as a result of their actions. In his following series, Dirty Pretty Things, he began to incorporate his popular use of diamond dust. The glam shots of cultural icons, glittering in pulverized diamonds, embodied the lusts and aspirations of their eras.

In the summer of 2009, Young went to the Greek island of Ithaca. Raftopoulos, who owned a home there, invited him to stay. The island served as a refuge. It led Young, who left behind his past and the expectations of his work on the shores of the mainland, to reclaim the feeling of isolation which had hounded him all his life. There, amongst ancient olive groves, he drenched himself in goat’s blood procured from a local butcher and pressed his body against linen. It was an outrageous performance meant for no one but himself. Like a blasphemous reimagining of the Turin Shroud, this feral and highly personal act marked a seminal turn. It began what would become an ongoing and visceral conversation between his body, memory, and the natural world. That conversation, however, was abruptly cut short the following year when Young contracted the H1N1 virus that put him into a coma for over a week. He nearly died. When he regained consciousness, he had to relearn to read and write, and he had forgotten the color green. When one of his children brought him a book of animals, he could hardly believe polar bears actually existed on our planet.

What has followed from Young’s illness is the maturing of that conversation and a preoccupation with a central dilemma: the exact edge where boylike wonder falls into violent truth. In his first series of paintings after surviving his illness, Young pressed canvases down into pools of red shellac, letting the resin drip, smear, and splatter like wounds. In Helter Skelter, he repeatedly screen printed images taken from the Rolling Stones Altamont Free Concert to the point of abstraction, echoing the infernal, disorienting frenzy that ended in the death of Meredith Hunter and the era of free love altogether. The counterculture of Young’s youth, once a source of inspiration, was now also a source of trauma. In his wake, he even left behind his own bootprints. A year later, in his series Only Anarchists are Pretty, he cut out pornographic images of bound women and arranged them like the brutal machinations of a mechanic lining the walls of his garage with pinups. These crowded arrangements were given the names of the council estates he remembered in Northern England, places like Thorntree and The Lache, which had once threatened to overcrowd and entrap him. 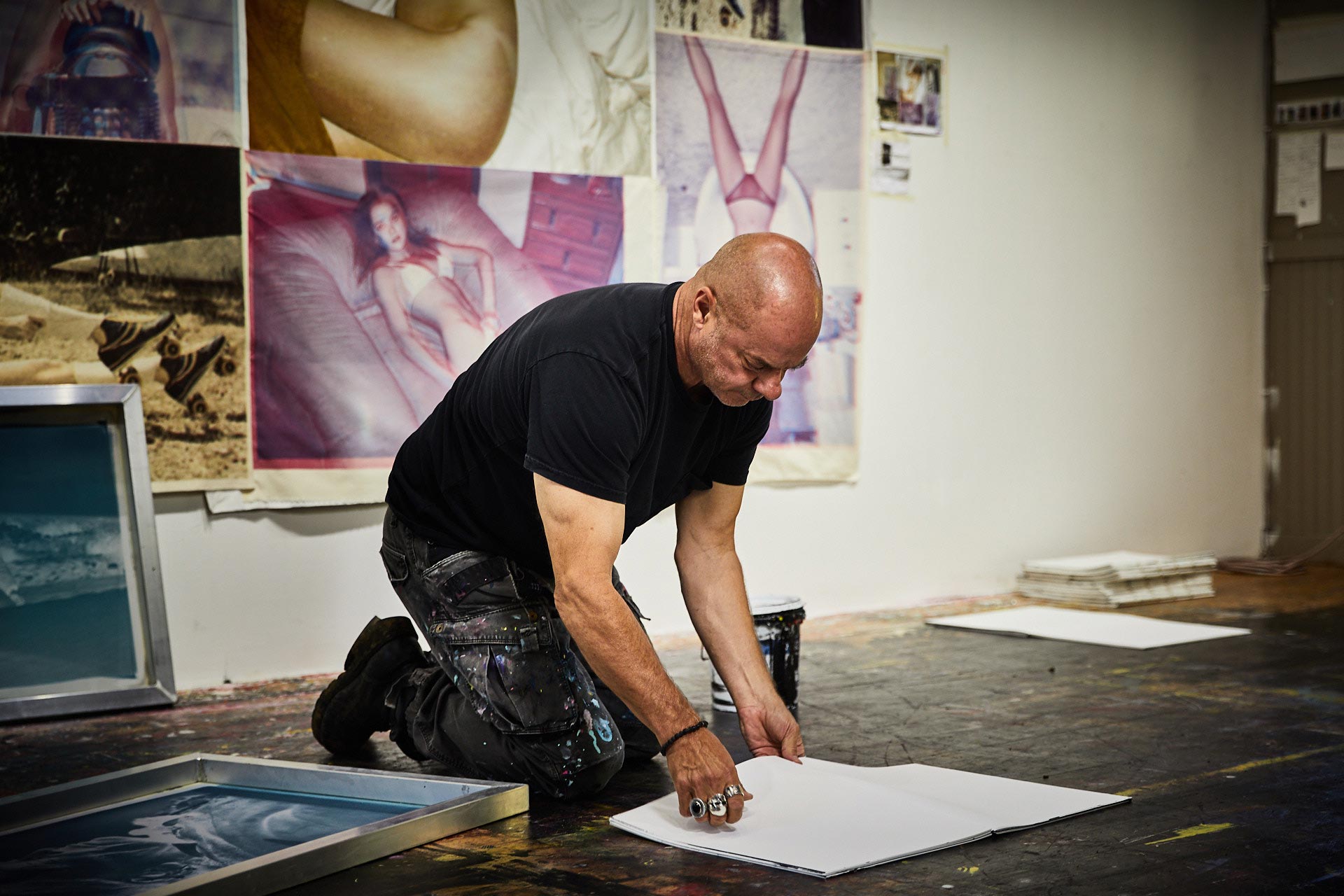 Young’s ongoing series, The West, perforates these claustrophobic visions for wider expanses. The West still taps into our most primal instincts but also our most grandiose dreams. The series features curiosities, knickknacks, heirlooms, and fantasies of his own world built within the larger framework of the American drama. The spaghetti westerns he watched in his youth, NASCAR racers before they were safely regulated, California girls, 70s big wave Hawaiian surf photography, the Marlboro Cowboy before he was commercialized into oblivion, Native American chiefs before they, too, were almost driven into oblivion—they all debut in Young’s quest to confront and interrogate the idealization of America’s history. Lately, Young has stitched his screen prints together, recalling the classic anamorphic widescreen of western films in order to pay homage and to also expose the artifice of our dreams. The breadth of this ever-expanding series is matched only by Young’s impulse to venture into the deserts and forests and oceans of America, to go as far west as possible.

Young lives and works on a Southern California beach at the edge of America. Once, when his mother visited, lounging near the pool beneath the imported palms, beyond them a view verging on the sublime, she remarked, none of it was real. Young frequently leaves behind this “paradise that isn’t real” and roughs it out in the wild. He might spend days out, sleeping under the freeway, or he might swim into the ocean to see the moon rise, or he might ignore evacuation orders and watch as wildfires lick the walls of his home. He returns with industrial grade felt from railroad tracks or giant pieces of charcoal washed ashore from other fires in order to experiment with them in the retrofitted airplane hangar he uses as a studio. He revels in the diesel-like smell of oil and enamel that reminds him of the London Underground. He drenches his work with salt water to see it rust. He exerts himself so physically, rending apart anything which is not real, in order to lay himself bare.

Recently, Young has begun to share his newest work that similarly draws from his childhood but also from a quieter strain of his usual endeavors. The screen prints of one series, set in a melancholy blue, depict turn-of-the-century photographs of animals that, if not already, will soon be extinct. In another, he enlarges paintings of Dutch Golden Age flowers to highlight the impossibilities of their unseasonal arrangements and their hidden messages. Both the animals and the flowers are evocative of an earlier Young, when he was awestruck by things that seemed out of reach and would do anything to grasp onto their truth. He is interested in secrets, those we keep, those we share, and those we are unwilling to confront. A rose petal might, upon a closer look, be riddled with holes.

It is these holes Young’s work illuminates. The holes of trauma, of carnal desire, of memory and history. Through them, he allows us to see vistas. In these vistas there are no expectations, no rules. He roams wherever he wishes, always looking for a space in which to be free, to experiment, to examine life and death. They are lands from which he resurrects dead dreams and crafts alternative ones. They are lands where invented realities are spun out of an earnest hope to reimagine both himself and ourselves.

Russell Young’s works have crossed the auction block at all of the world’s major auction houses, including Sotheby’s, Christie’s, and Phillips.